Romuald Demidenko
OUT OF STOCK

Behind the Screen: Body in Confinement 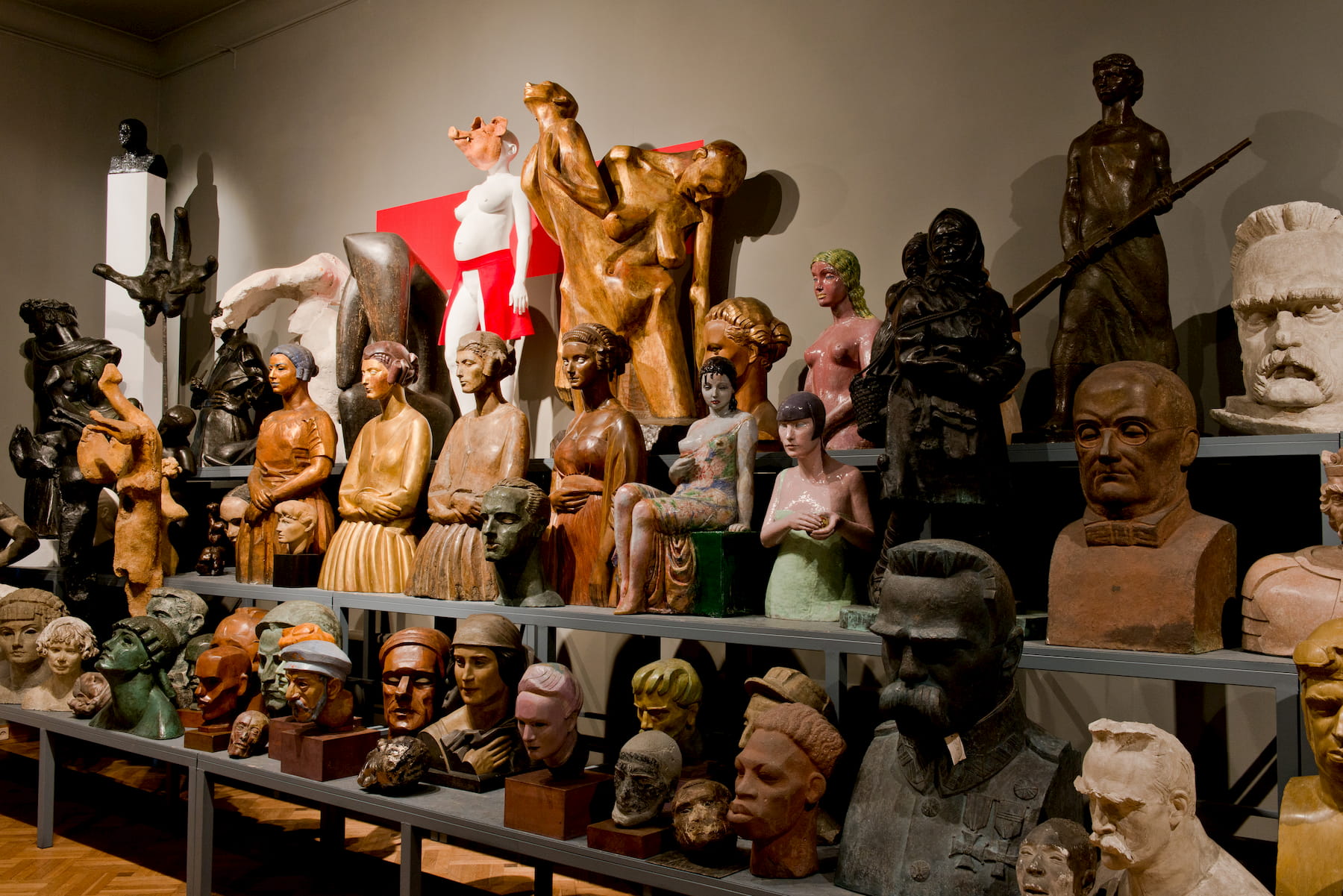 Anna Baumgart's Bomber Woman [Bombowniczka] amongst other works presented as part of _Skontrum Ewolucje_, 2012, installation view. Courtesy of Xawery Dunikowski Sculpture Museum, Division of the National Museum in Warsaw. Photo by Bartosz Górka.
As OUT OF STOCK rightly acknowledges, the notion of shortage is a familiar concept for the countries that are now considered New Europe. The shortage marked the moment when the pandemic actually appeared, taking weeks until we were again able to find masks or hand sanitizers for regular sale. The lockdown occurred suddenly and was an instant sobering-up of our expectations towards everyday production ― the quarantine forced us to slow down, which even still has a very real potential consequence of aborting our contemporary cycle of accelerated neoliberal capitalism. The pandemic has shown us how our lack of cohesion, our disparate movements and aberrations, can easily be labeled a crisis “of awareness, perception, sense and meaning”¹.
‍
An artwork that I have come back to in this moment is Bomber Woman [“Bombowniczka”] by the multimedia artist Anna Baumgart. The piece, considered to be one of the most iconic works in Polish contemporary art history, depicts the figure of a woman enceinte, wearing almost nothing aside from a apron-like fabric fastened at her hips, or as the title suggests, a suicide belt. Perhaps the most jarring aspect is her head, which is covered or masked by the face of a pig. This almost posthuman attribute² creates a paradoxical message, which is why it is both important to interpret the sculpture itself as well as its use within this text.
‍
For me, this state of confinement that we have witnessed has evoked thoughts of exclusion, which have led to an increased awareness for those who have already been locked-down or somehow trapped by the system even prior to the quarantine, similar to our Bomber Woman, who has nothing left to lose but herself. The sculpture is full of visual codes for us to decipher. Baumgart constructed this work in a way that triggers the need to disassemble the various attributes while simultaneously asking for the work to be treated as a whole: “The affection-image is the close-up, and the close-up is the face (...)”, to quote Deleuze³. The artist states that if the artwork has a function, it is because of the affect: a contagious feature capable of bringing change, a rebellious act or even a legislative shift⁴. The fact that the figure’s face is covered with a pig’s head has triggered strong reactions from those who suggest that the work actually represents Matka Polka [literally 'Polish Mother', the mother hen], and therefore these offensive attributes of exposed genitals and covered face should either be faced entirely or not at all, that she faces the wall so that we see her from behind⁵. The fit, firm body is armed with several accessories: a piercing in her nipple, the apron or belt tied around her waist - which is also reminiscent of clothing worn by Sumerian goddesses -, and, finally, high heels with socks⁶.

Whom or what is the subject of Baumgart’s portrait? A much younger friend of hers who can barely make ends meet, who then accidentally becomes pregnant, or is she a centuries-old terrorist ⁷? What creates her need to fight, to defend, in this almost anasyrmic[ἀνασυρμός]-kind-of-way? Is it because she is forced to sacrifice her being like so many other women?
‍
When looking at the apron and interpreting the title, we understand that what covers the waist of the woman is this suicide belt. In Polish, the figure of Matka Polka is a female who consents to sacrifice herself for her country: to raise her children and to keep her family in accordance with the traditions and values of her nation. Does Bomber Woman symbolically bury this paradigm? And if so, is she herself what emerges as the replacement for this outdated notion of mother(nation?)hood and female-ness? The affective aspect of this sculpture, which triggers strong interpretations and reactions, suggests that the overlooked [non-human] body should also be given agency.⁸
‍
The sculpture is one of Baumgart’s most well-known works and most likely exists in the format of an image on myriad screens and otherwise online forums.

With the rise of image saturation across different social media channels, we’ve become accustomed to seeing countless photos of bodies: the more we see them the more we accept them, the more we are desensitized to them. Not only the ‘beautiful’ bodies in the selfies that blur past our fingers while scrolling through Instagram accounts but also the marred or violated bodies of war or other instances of forensic aesthetics. ⁹
‍

The stark white coloring of Baumgart’s figure is an abstraction or detachment from natural skin pigmentation, which also somehow aligns this chalky body with that of a mummy. The textile adorning her hips is blood-red and thus almost instantly calls to mind the Polish flag, which also feels like an overt gesture by the artist. This sculpture was created at a time when right-wing advocates were searching for their visual language. Naturally, the flag was a perfect resource; shortly thereafter, a wave of patriotic white and red pseudo-sport fashions befell the nation. The two-party system was somewhat surprisingly aligned in their staunch criticisms of this work; the addition of the animal head to the body of this pregnant woman inspired attacks for Baumgart’s disgraceful use of the national emblem as well as her disgrace to the figure of the mother, further humiliated by her nakedness.
‍
But why am I drawn back to this piece now, in this moment? The appearance of SARS-CoV-2 has triggered new types of behaviours and has revealed just how easily we can adapt to new safety rules that will help protect us from the disease. It also demonstrated just how easy it is to keep us away from everyday reality as our views very quickly became narrowly re-framed and filtered by algorithms created for and used by social media. We have all come across images censored for ‘sensitive content’  within our Facebook or Instagram feeds. This also applies to artworks, both in social media and in real life. Covid-19 serves as yet another reason to hide our body parts. Our activities in public spaces, especially during the lockdown, were very limited. Apart from the restrictions tied to the virus and its accompanying props, the pandemic highlighted the fact that by locking people in their private spaces, the public space could be more easily opened-up again for discriminatory and highly contentious legislative agendas, like banning abortion, in the case of Poland¹⁰. Like that of other works by Baumgart made during this same time period, Bomber Woman hovers around the complexities of motherhood as well as the roles that women play in different contexts. In conjunction with other issues typically relegated to women, these works were also being made during the time that Poland entered the European Union (2004), shifting the public eye towards issues of terrorism and other embodied, nationalized fears. Baumgart’s practice defies simple explanation and rather reveals itself again and again through both the materiality and the more formal qualities of her work, as she reaches for traces, patterns, representations and their interpretations, of both historical and contemporary figures, fictitious and real, near and distant. In her films and sculptural projects, the division between created and re-created image is violated. This work in particular has been recognized for its role in reframing images of motherhood, for disassembling more traditional interpretations, and adding a dimension of martyrdom, which is more typically relegated to the allegory of Polonia¹¹. It has turned out to be prophetic in the sense that it was created at least a few years before women started marching in defense of their rights, and so, of course, now it can be reinterpreted again from this more current perspective of masking.
‍
Over the past few months, we have started using enormous amounts of hand sanitizers and have avoided crowds for safety reasons. Keeping in line with social distancing protocols, we have newly covered our faces with masks along with other more quotidian daily rituals of hiding or covering ― performed almost imperceptibly ― in order to stay sane amidst the threat of being infected with the novel coronavirus. The material accessories of masks and other forms of veiling for security purposes have led to an almost exclusively screened environment, which serves as the backdrop to SARS-CoV-2, clearly delineating the moments during nationally-sanctioned social isolation from those that came before.
‍
To endure this period of restriction, we have adapted to working remotely, homeschooling, and executing, essentially, all other activities from home.
1

The artist references both aspects related to her work: non-human and posthuman which can play a role in interpreting her work as the appearance of the artist’s work overlaps with the emergence of late-twentieth-century posthumanist concepts in philosophy (and animal studies), especially in Donna Haraway’s texts such as her Cyborg Manifesto (1985), recurring then in the late 1990s and the early 2000s.  back
3
Gilles Deleuze, Cinema 1: The Movement Image, trans. Hugh Tomlinson and Barbara Habberjam, Minneapolis: University of Minnesota Press, 1986, p. 87. back
4
Anna Baumgart: sztuka jest silna, gdy wywołuje afekt [Anna Baumgart: art is powerful when it triggers affect], interview by Przemysław Bollin, 6.09.2018, Onet Kultura, https://kultura.onet.pl/wiadomosci/anna-baumgart-sztuka-jest-silna-gdy-wywoluje-afekt-wywiad/fls92qz [accessed 12.07.2020] back
5
Shortly after the opening of the exhibition in 2005, the first public presentation of the sculpture: Dzień Matki [‘Mother’s day’] the artist and curator were asked to present it from behind to the gallery storefront.  back
6
My paraphrase of the author: Iga Gańczarczyk, "Każda boleść chce wyrazu". Uwagi na marginesie wystawy Zaśpiewajcie, niewolnicy Anny Baumgart [“Each pain needs expression”. Notes on the margins of Anna Baumgart’s exhibition <<Sing, slaves>>], Widok. Teorie i Praktyki Kultury Wizualnej, Instytut Badań Literackich PAN Instytut Kultury Polskiej UW, https://www.pismowidok.org/pl/archiwum/2014/6-obraz-patos/kazda-bolesc-chce-wyrazu [accessed 12.07.2020] back

‘There are no politics that are not body politics’, Preciado has recently reminded us of Foucault’s words¹⁵. Under the specific conditions of Covid-19 we have quickly redefined the concept of accessories, which lose their visibility [affect] and gain special function, even if they do not actually work.
The mask: one of those few visible props of the pandemic, has incited a whole cycle of consciousness — in the beginning we tended to dismiss their appearance, perhaps out of fear? Shortly thereafter they became more and more regular and then obligatory, and now it is their lack that triggers our attention and our bare faces somehow now feel naked.
‍
We are now witnessing the circulation of images of the body, appearing via digital lenses, which overlap with the paroxysms of the cynical dysfunction of neoliberal democracies. I propose having a look at Anna Baumgart’s work to expand potential readings of this affective dimension, regarding the props we use during the pandemic as well as the potentially violent gestures of clothing and stripping.
Now, with the saturation of social media agencies and opinions created hurriedly and projected proudly, we are again seeing more conservative gestures arising in Europe, reminding us that the subjectivity of the ‘naked’ body will soon become policed in a more overt way. Baumgart’s work becomes an icon of contemporary art, which expresses the spirit of our ongoing debates on feminism. But, it also serves as a carrier of other meanings connected to camouflaging and politics, encouraging one’s own interpretations. In light of the controlling agencies embedded in our digital devices whose presence we are already very aware, we probably understand the immediate and pervasive functions of these works. The problem of overlooking can be related to the bare bodies of the pandemic, or as well be extended to those who have been pushed to involuntary confinement long before the virus ever forced our hand.


I would like to acknowledge the artist Anna Baumgart who approved of the idea of my essay, Edith Lazar - the editor of OOS for accepting my proposal and, last but not least, Kathryn Zazenski who linguistically consulted me and my prattle.