Diana Dobrescu
OUT OF STOCK 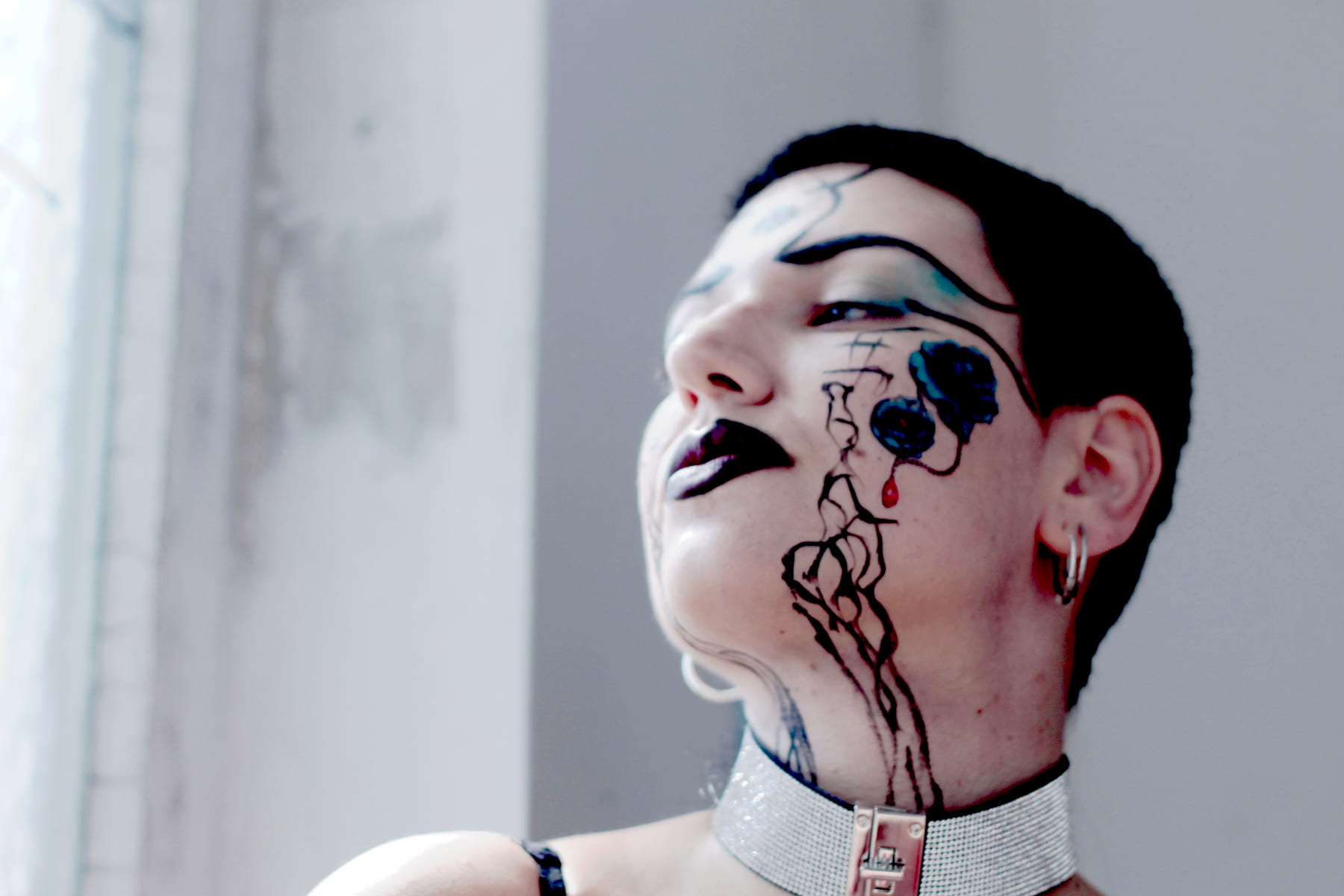 Courtesy of the Artist
When you think of ‘Identity,’ usually (and mostly involuntary), you add up nationality, gender, age, and – all together –  a mass of boring parameters, no?

Hi, my name is Diana Dobrescu, and I'm a transmedia worker on a triple ID life. I’ve only started making my Being-creative-in-music back in 2017. Today I enjoy assembling clothes, makeup, accessories, scenography, music, and video so as to design my own triptych reality.
I believe that unveiling the unknown along with the body, is a permanent tool for resisting the system: one that implies courage and self-discovery. Obviously, it hasn’t been the easiest path, but then again, what is easy without working, sweating, and feeling at your core that you earned your body and the spirituality of your DNA?
1

shooting ‘Durga Chirurgia’ video was a unique challenge. Father, behind the camera, disapproved of my looks and refused to clip me the way I chose to present myself. We yelled, shouted, our Balkan blood testing the thermodynamics limits of logic. Suddenly, the judgement dissolved without a focus anymore on the images themselves. He then received my instructions and applied them one by one. Images were captured in less than an hour. We didn’t talk much after, but it feels like his trust in me had grown somehow. He clipped well. This message – and the clip I’ve been editing – is dedicated to all of us queer souls, who still sparkle, glisten bright, and dare to be who the fuck they want to be, mostly when one is stuck within a family’s parameters. Courage in the face of fear is still central, still vital.  back
As an example of a daily conscious transmutation, I'll introduce to you the makings of my DIY Durga Chirurgia, video ‘clipped’ by my father and I. ¹

Showing the natural, compassionated killer in me:

‘the art of not giving much of a fuck’ is a privilege. And once you understand it, you can claim it and make better use of your time – not giving a fuck of what people think of you by, instead, strengthening your looks and individuality within a fighting community.

Let me now introduce you to each of my IDs, so that you can get a better grip of the vegan meat I embody, I inhabit.

The project started three years ago with a pop ensemble_ I had no experience in music production back then, and nearly as much awareness of my cyclic creative flow. Straight away, I must translate this lack of confidence to an astral symmetry, which, through time, I decoded in my energetical chart: a geometry that is known as 'Yod'. Just look it up. But the main idea it carries out is that I've always been perceived as the girl with the head in the stars - maybe you can play 'Kelly Watch the Stars' by Air while reading this.

Now the essence of this image had to be worked up, and with passion. A desire to understand higher forces at work for humankind. To be honest, I easily get bored with grounded, squared convos. The first eight-track sugar-cooking LP, 'Cake Space Great Again' (2018), grows from a devotional cosmic pop with exquisite bass lines – or so I've been told. After its release, I've been touring for two years, writing new songs on the road, getting more introverted while faced with the deepest reality coming at me. The two other IDs were molded from opening up the sources of this and facing the trauma. When now, in 2020, I present 'Dark Goddess Yod Transmutation' (a cyberfeminist album movie), I talk, scream, mimic, and sing out pleasure, sexuality, and trauma through a 10-track dark artpop LP like a human karmic debt.

This project imposes another solidification of the feminine sound beyond the image of the Christian or religious serving-woman. Different languages have a significant role to play in the way I present and envision my work. Japanese culture, in particular, has a firm grasp of horror and psycho human boundaries. Apocalyptic scenarios, extra-cute mangas, they have de-blocked, freed-up a pleasure zone in my life, and stimulated my DNA in high school. Ever since, if I had difficulties when expressing intense emotions, I would rather do it in Japanese – which brings an inevitable rethinking of my so-called Eurocentric education, allowing me to piece together the puzzle for another character within its reality.

Monica Kinolta is one that creates horror scenarios composed of radical sequences narrated mostly in Japanese.

Violence is a bias for a renewed identity between the digital ghost and the audible.

A battle takes place in the embryo of a watched agony of a kind.

Mythical warrioress becoming a cyborg by using her body as a 360° voice diffusion echoing system. Harmonising a past’ symbol within a cyber-identity allows me to destroy human normative perceptions and reconstruct a performative base for a cyberfeminist gesamtkunstwerk. I like to perform among the public, observe reactions while performing. It triggers daring moments and shows the degree to which an audience gets immersed in such performances. Seeing people resisting or following their desire for the unknown becomes a source of inspiration. Cyborg Amazon controls delays, chorus, and other effects during her storytelling. It's a whole sound prototype that I’ve developed during art residencies.

This triple ID exposure helps me draw and build up various worlds according to my moods and desires, fluctuating when facing unknown feelings, places, and spaces, as it does when one travels around (both physically and through imagination).

You can listen to Dark Goddess Yod Transmutation here.