Borbála Ferencz
OUT OF STOCK 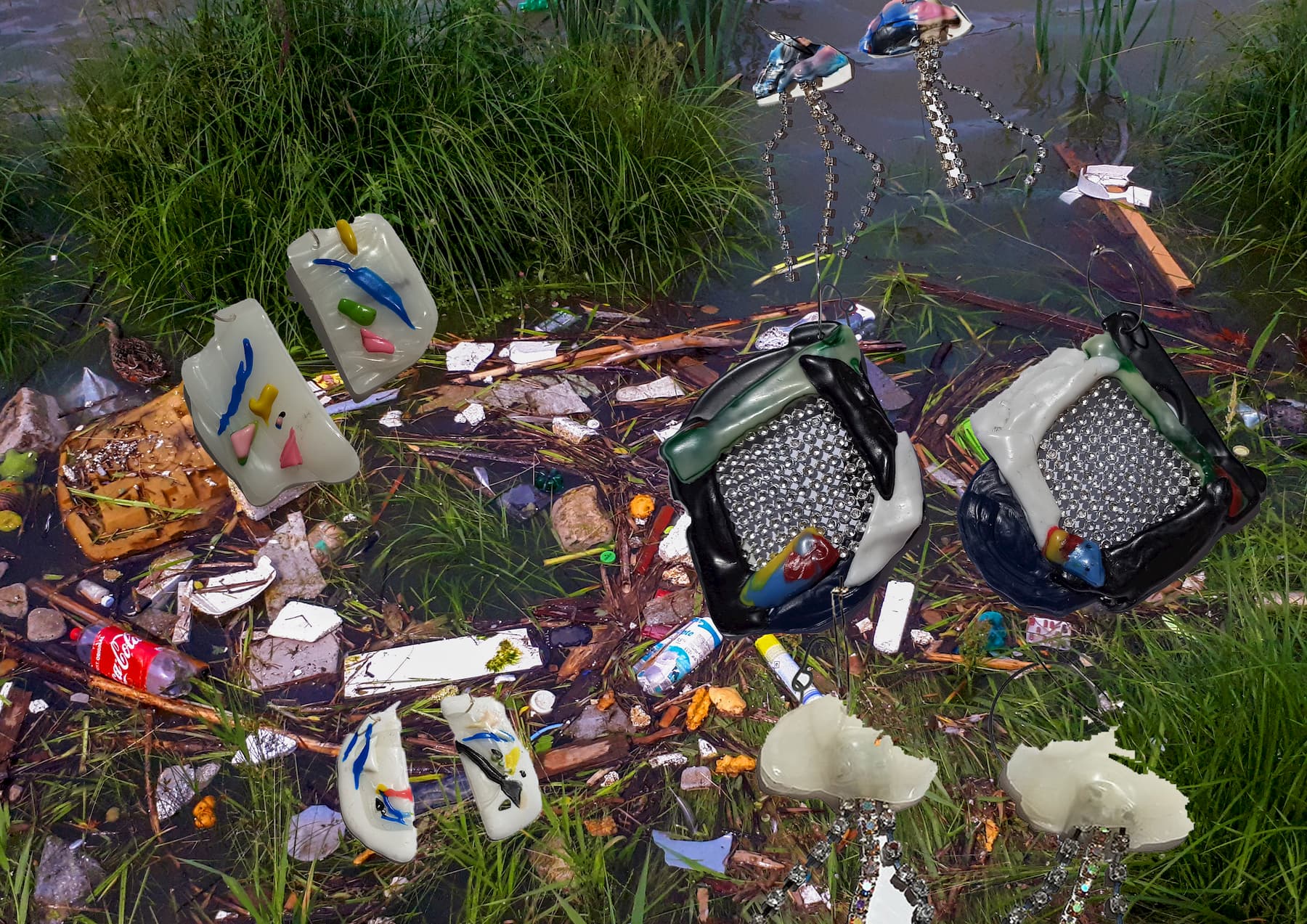 Borbála Ferencz: creature-earings collection.
Translucent plastic bottles and some empty bags of chips resting near a green bush. PET bottles and plastic sacks floating on water, gathering on river banks. We know that they are not supposed to be there. We are taught early on how nature looked like before plastic was invented. We (still) differentiate between Nature and the Waste we’ve created in our ‘throwing-away’ culture. For turtles, however, it’s not so easy. They are not able to distinguish, as we do, a jellyfish from a plastic bag. How will nature deal with the situation humans provoked? How will our future look like?
This speculative design project is contemplating the uncanny environment created by pollution and climate change. The project features wearable jewellery pieces made from post-consumer plastic waste, presented in digital surroundings where they “don’t belong.” Since we got accustomed to a particular way plastic should look like, we see it as molded into precise shapes and made in series. As bottles, food packaging, or plastic cutlery, for example. All these objects are designed to fulfil a specific purpose, and when they’ve done so, they become useless. At best, they end up in collection-points for plastic and recycling centers, but this is rarely the case. When they end up somewhere else, humans are left with little or no control over what will happen to these plastics and how they are going to affect our surroundings. Yet, once escaped from a controlled environment, plastic can become a unique, unrepeatable object. If exposed to heat, it will melt. When under prolonged sunlight, it will break into microplastics through a process of photodegradation. The borders between natural and human-made, synthetic and organic, have already faded.
Plastic invades oceans, forests, and can reach every hidden place of the Earth. Can we consider that, at some point, it will become an organic part of nature? In thousands and thousands of years, will plastic be just another element in the ocean’ sediments?
Humans altered nature intentionally, but some alterations are just happening as collateral damage or as unforeseen development. Some species, like jellyfish, seem to adapt quickly to the effects of climate change. Plastic bags floating in the oceans can kill ‘predators’ like turtles. The seas’ average surface temperature has seen a rise lately, and many fish suffer from the lower oxygen percentage. But jellyfish are all immune to these threats. Instead, plastic can be said to generate a favorable environment for them. 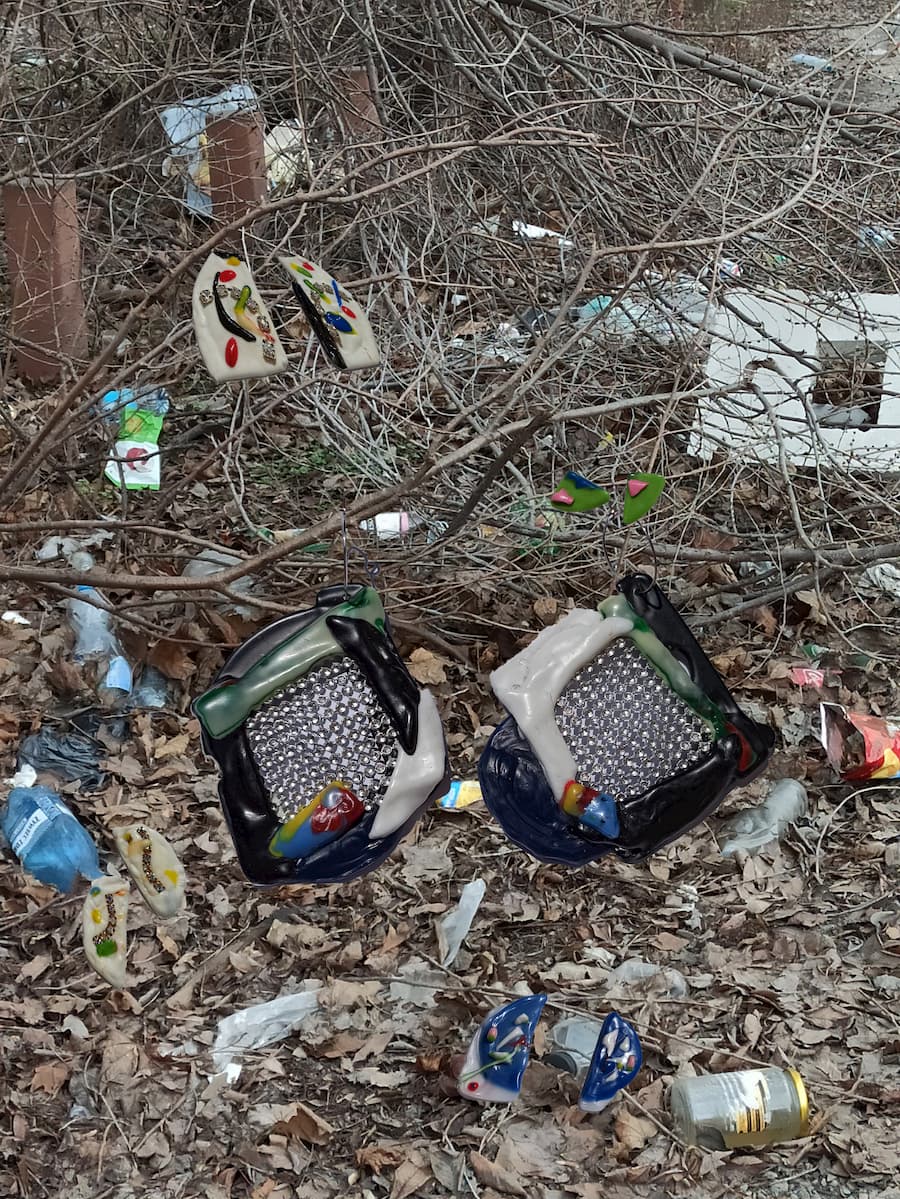 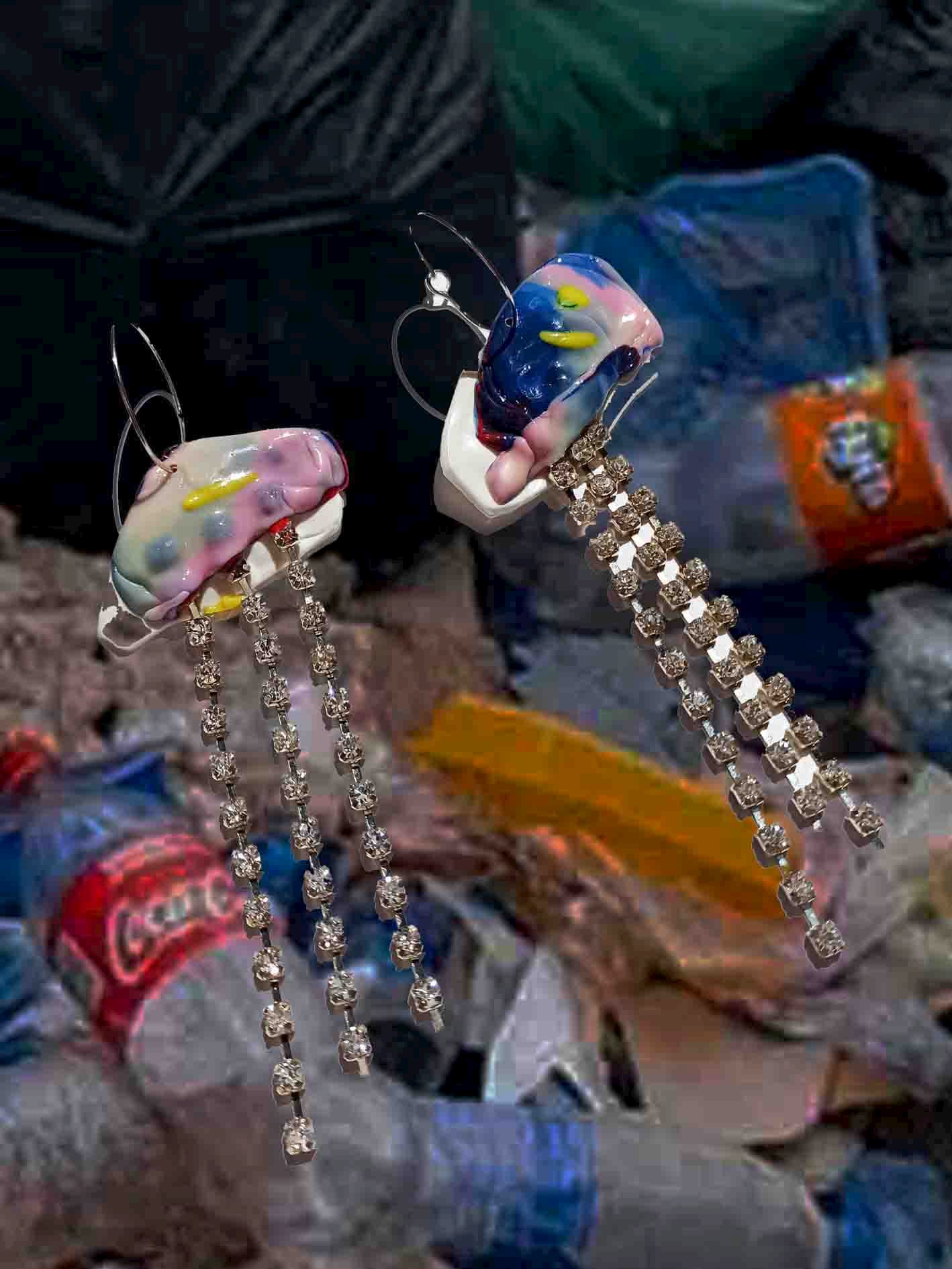 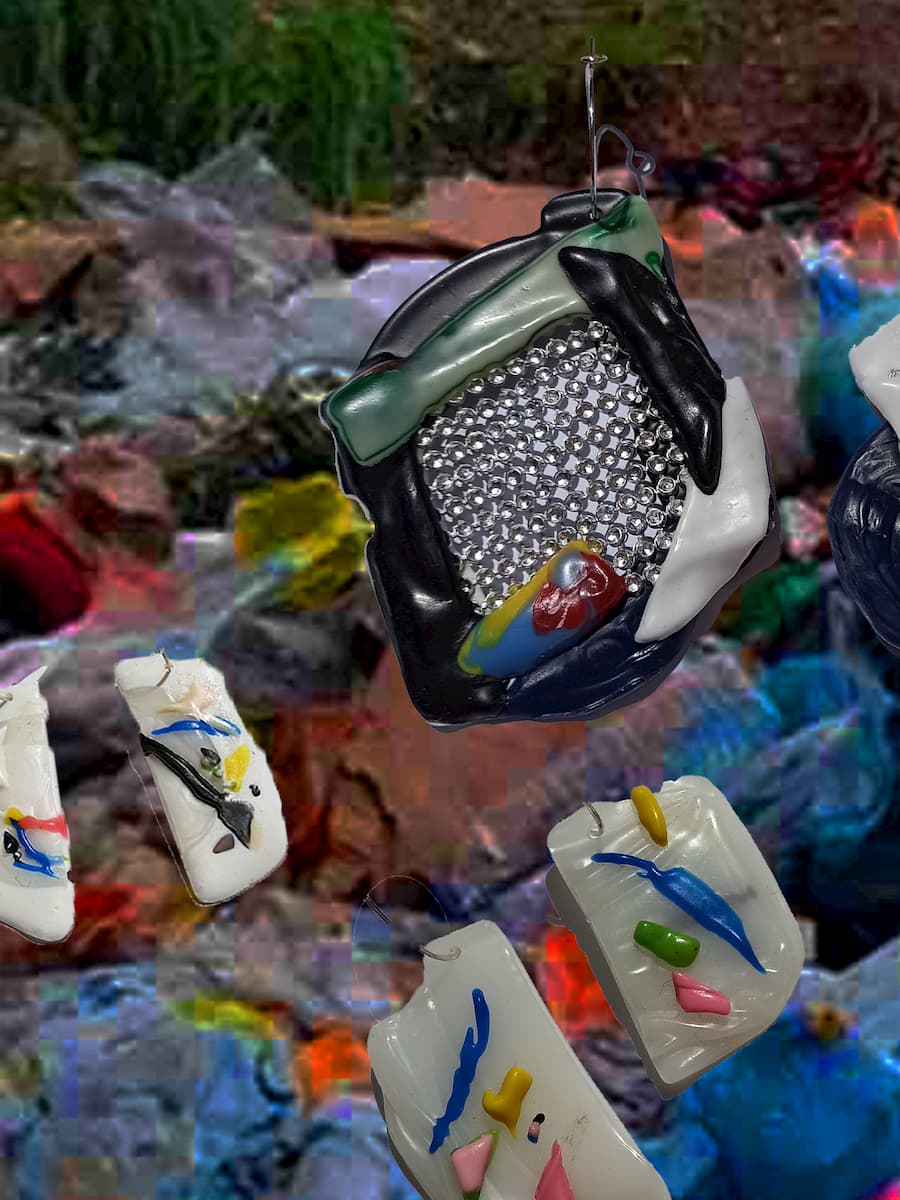 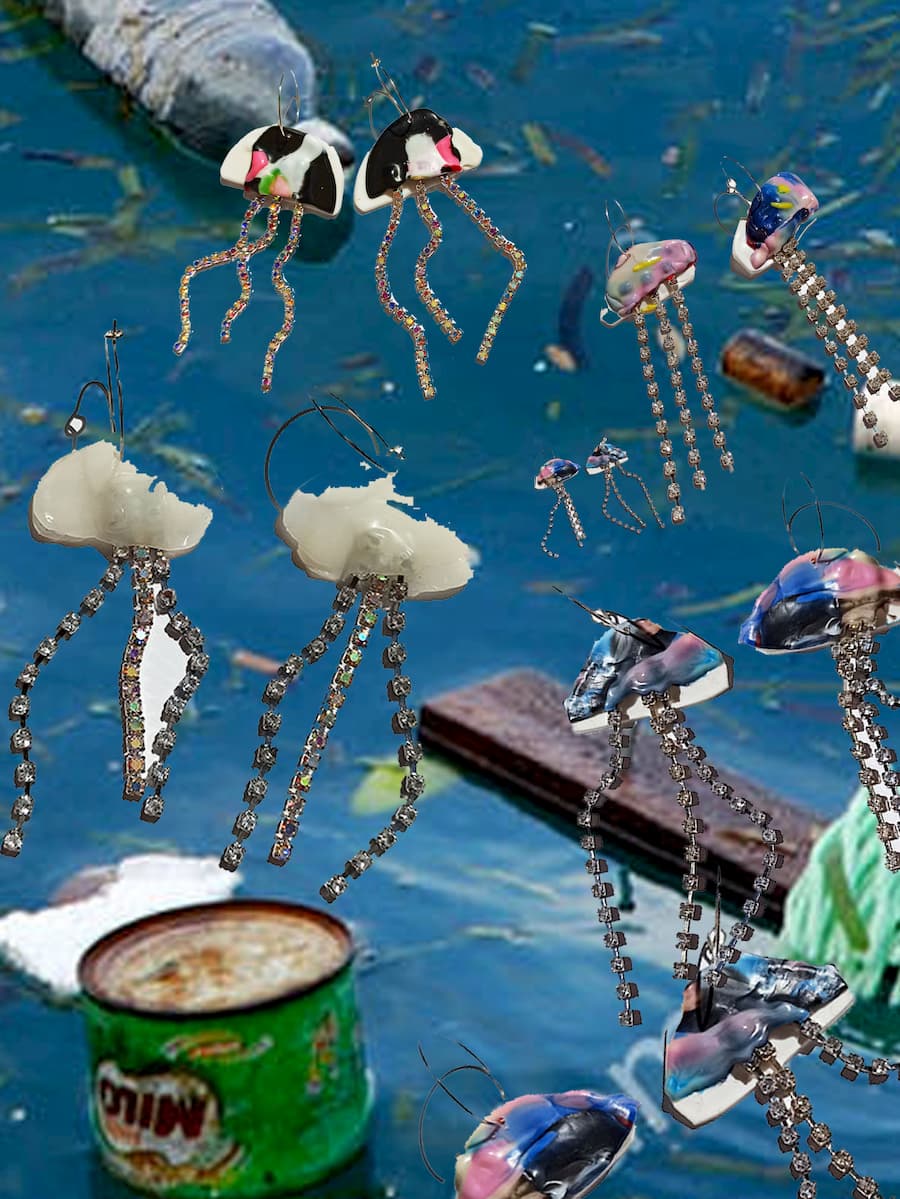 The body, the face, the skin, have all come into the attention of early and foundational eco-feminist theorists precisely as matters of design – of both recognizing and creating, spotting and envisioning these affordances of life-being. Affordances here mean possibilities of embodiment, so our designing goal is finding and supporting those possibilities that better lead to an experience of being at home in the world. The skin foremost became a privileged site of intervention. As early as 1991, Donna Haraway asked: “Why should bodies end at the skin, or include at best other beings encapsulated by skin?”⁴ In her foundational work, beautifully entitled Volatile Bodies, Elizabeth Grosz also suggests that porosity is an axis through which we are of and in the world:

“The limits or borders of the body image are not fixed by nature or confined to the anatomical ‘container,’ the skin. The body is extremely fluid and dynamic, its borders, edges, and contours are ‘osmotic’ – they have the remarkable power of incorporating and expelling outside and inside in an ongoing exchange” ⁵

There is an intricate relation of constant and vital transfer between the inside and outside of the skin. The skin itself is an active site of trans-corporeality. That this vital openness is sometimes lethal is something that we recently became awfully aware on an unexpected large scale. The skin pertains to the material reality as much as it pertains to a symbolic imagery of artificial separation. This is a matter of design – one that has been designed on scraps of habits and prejudices of old philosophies.

Is then the Anthropocene a tactile experience? Inasmuch as the skin is this active, “osmotic” site through the body’s enmeshment with the world, then, yes, the Anthropocene is an epidermal matter of concern and design. Rosemary Garland-Thomson, feminist theorist writing on disability studies, offers us a suitable way of thinking about corporeality in the Anthropocene, as an ecology of relations. As she notes: “all bodies are shaped by their environments from the moment of conception. We transform constantly in response to our surroundings and register history on our bodies. The changes that occur when body encounters world are what we call disability.”⁶

The skin is embroiled in climate change as a relational form of eco-sickness. This is a sickness that inhabits both human and non-human bodies, revealing their entanglement and co-dependency. We inhale the world; from the oxygen we need to survive mixed with other chemical parts that might hurt us, to numerous shed fragments of skin, as well as a multitude of micro-organisms.

The question is then: will humans be able to adjust as easily to this environment resulted from the consequences of their inventions? Or is that Earth slowly turns into a place more habitable for jellyfish than humans? Which species end up “winning” from this? Are we witnessing the unexpected rise of a new species?
The earrings in this project are a mixture of intentional, accidental, planned, and random processes. They are navigating a vague realm between organic and synthetic, futuristic and thrown-away, human-made and natural, blurring all at once designing and making, creator and creation. When plastic bottle caps or shampoo bottles are melted together, beyond a certain temperature, they start to lose their human-made shapes; they tend to go back to their “original” form, to shapes that are more „natural” for them. At this point, the plastics are the ones creating their own shapes.
‍
These earrings present plastic as unique, accidentally crafted objects in contrast with the mass made, precise, single-use ones. Thus, they point to unusual aspects of the interaction between plastic pollution and nature. It is a speculation on the future of abandoned plastics that will, ultimately, define our future as well.
Borbála Ferencz is a fashion and jewelry designer based in Budapest (HU) and Târgu-Mureș (RO). She is working with experimental plastic recycling and low-tech textile recycling. Through her clothes and objects created from waste materials, she likes to question what is considered precious, and what is trash. Her works have been presented at several exhibitions and fashion weeks, from Kyiv to San Francisco. Instagram
AUTHORS
CONTRIBUTIONS
Thoughts on Porous Skins: A Matter of Design
Ana-Maria Deliu
Past Pieces Merging With What I Call Now
Monika Gabriela Dorniak
Notes on Frugal Future Manifesto
Z. Blace
XXX — Queer Bodies, Queer Futures
Laura Naum & Petrică Mogoș
Market Values: Mapping design values from post-Soviet markets
Brit Pavelson
Becoming internet
Marina Oprea
Unfolding Yod – a Triptych
Diana Dobrescu
Behind the Screen: Body in Confinement
Romuald Demidenko
Life is a Bitch
Silvia Amancei & Bogdan Armanu
working_lass_hero_ine
Anne-Kristin Winzer
What We Are Made Of
Angelica Falkeling
Any Form can be Performed. Uniforms for the Cultural Workers of ECOC Rijeka 2020
Mia Ventin
C’EST LA VIE. The potential and the interpretation of objects
Ola Korbańska
Plastic. Co-Creating Post-Nature?
Borbála Ferencz
Fungoid Horror and the Creep of Life
Chlorys